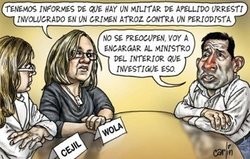 Recently appointed Minister of Interior of Peru Daniel Urresti has been the brunt of domestic and international criticism because he has been formally charged with the 1988 murder of journalist Hugo Bustíos. Bustíos was killed while investigating human rights abuses committed by government forces during Peru’s internal armed conflict (1980-2000).

GLOA Affiliate Jo-Marie Burt, a Peru specialist and a Senior Fellow at the Washington Office on Latin America (WOLA), was featured in a political cartoon by Peru’s foremost caricaturist, Carlin, after a public statement by WOLA and other organizations questioning the Urresti appointment. Seated with a colleague, Burt questions Peruvian President Ollanta Humala about the charges against Urresti; he says he will have the Minister of the Interior investigate.